A group of  white supremacists who targeted Aston University with racist stickers and made Nazi-style salutes on campus have been jailed.

Stickers bearing messages including "Britain is ours - the rest must go" and “White Zone” were plastered across the Birmingham based university in July 2016. 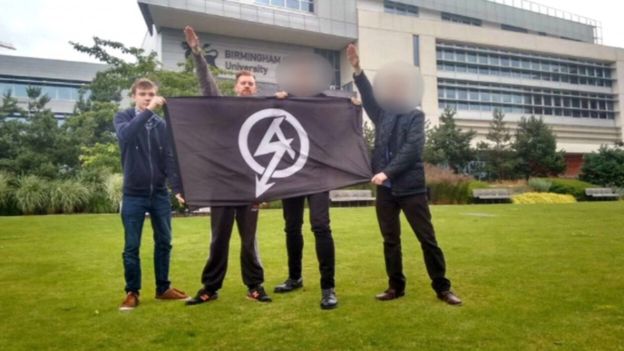 The men involved were caught on CCTV and subsequently charged with inciting racial hatred.

While they admitted to putting the stickers up they denied the charge against them, claiming they were exercising their right to free speech.

It took a jury just four hours to find four of the men on trial guilty, with a fifth man found not guilty.

Chad Williams-Allen, 27, from Bird End, West Bromwich, was sentenced to 21 months in prison while Garry Jack, 21, formerly of Heathland Road, Shard End, was given a 12-month sentence, suspended for two-years.

Two other men, aged 23 and 27, who cannot be named for legal reasons, were handed 12-month and 16-month sentences respectively.

Judge Paul Farrer QC told them: "The stickers could encourage people to believe that, as you would refer to them, 'non-whites' represent a danger to society, and society should be divided along lines of race."

He added: "In this way you each intended to stir up racial hatred. Your behaviour was calculated to not only undermine these values, but also to foment hatred and unrest in society."

According to Judge Farrer, Mr Williams-Allen "identified with Adolf Hitler and Nazi Germany” and was “anti-Semitic and a profound racist."

The shocking hate crime took place on the same day as a Black Lives Matter march and the stickers were part of recruitment tools for far-right group National Action, a group the men were all members of the judge said.

Asking for it!
Leave all the junkies to rot.
Condemn the Circus Cruelty
Live Review: Mindless Behavior
Interview: Paul Van Dyk
New bands we saw at Primavera 2013
Why the Magna Carta is imporant to students
Film Review: Selma
78% of models in 2016 spring ad campaigns are white
These are the most popular postcodes in the UK for young professionals